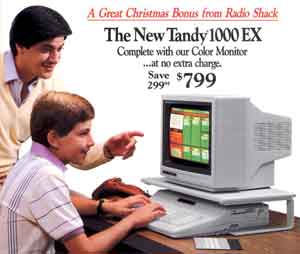 If you’re looking for one of a kind jewelry and all things angels, you will love Angelhaven.  Check out Angelhaven

Lately, I’ve been thinking about a young lady who I met in a chatroom on Angelhaven.  I’m going to write about some of the friends that I’ve made in Angelhaven.  This is my experience with trying to learn how to find Angelhaven on the computer.

I believe my first experience with any computer type of machine was around 1997 or 98. I always felt like computers will be a passing fad. I had no desire or need to get on any computers. I would get into arguments with my husband and daughters since I thought they weren’t worth getting one.  I felt like it was a waste of time and boy was I wrong on that one.

My husband is a truck driver and while he was in his truck he was reading a magazine. One one of the pages there was an advertisement. The advertisement was about a website called Angelhaven. Since I believe in angels and I’ve had times when I’ve experienced the healing touch and presence of angels around me.

We did eventually get a computer in the house and it had Windows 98 on it. The issue with the computer is that I had no clue how to even turn it on. I didn’t know what a keyboard or a mouse was. Well, I knew what a mouse was, but the only mouse I knew was the kind that needs to be killed. 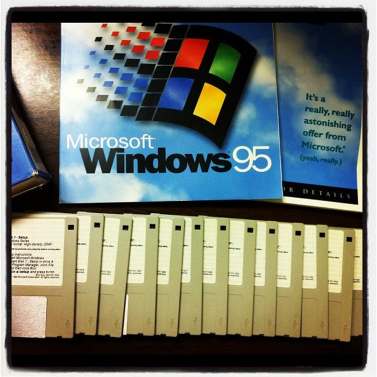 My daughter Jessica was in high school and she was taking a computer class. I asked her when she got home if she could help me find the website and if she would help me get started.  After she got home, we sat down together and she showed me how to turn the computer on. This was the beginning of a new world that was opening in front of my eyes. 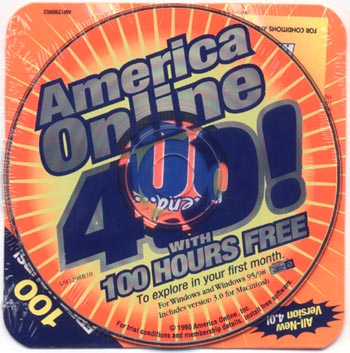 The computer shown here is similar to what we had. So, I turned the computer on and she told me we needed to get online. Egads, that was a word I’ve never heard. I was getting stressed and we were just starting. I asked her how we get online and she told me we have to sign up for the internet through a company. We didn’t have WIFI back then.  We had dial-up and I think it was 56 Mbps. That means it took at times 5 minutes to go through. For some websites, it would take a while for the pages to transfer. We didn’t have the money to get the internet, but we got a disk in the mail and it was through AOL We were excited because we had 100 free hours. We thought we scored big time (WRONG). When I mentioned how getting a computer wastes time. Well, I was right. you don’t pay attention to the clock. 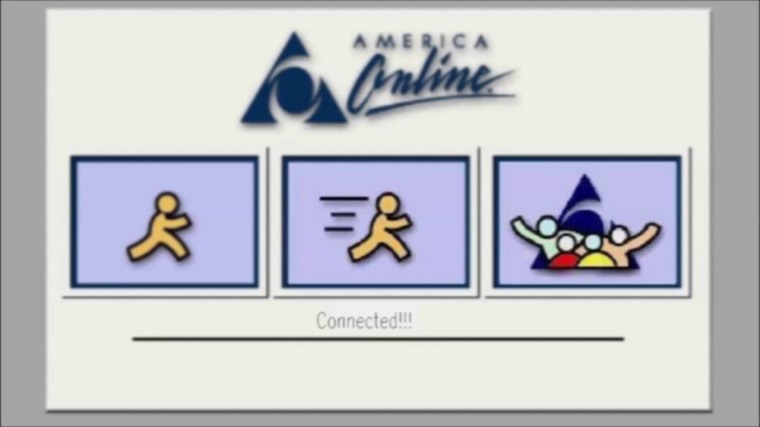 Now, after a 5-10 minute wait to get connected, we were ready to look for Angelhaven. We’ve already wasted about 30 minutes trying to get online. Here’s a 30-second youtube video that will give you an example of the sound that goes along with getting hooked up to the internet. We dealt with this sound for around 10 minutes. Click here to listen to the dial-up tone. 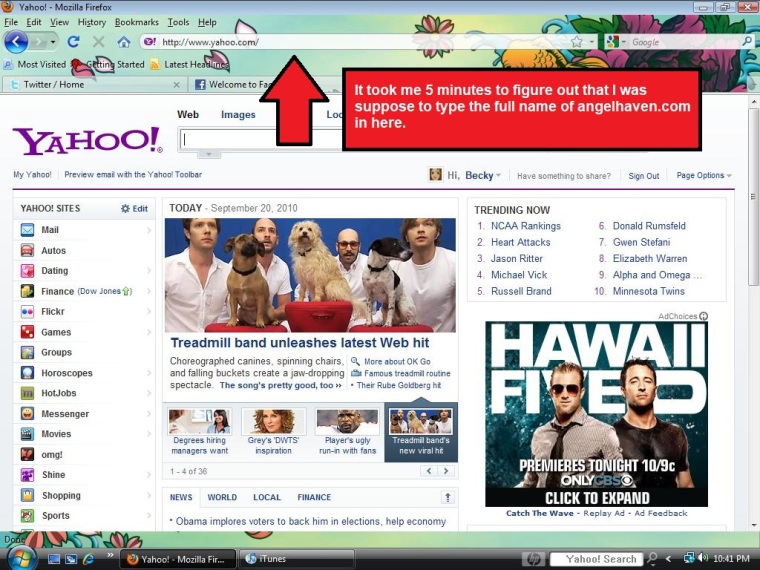 The reason it took so long was that Jessica was in her room doing her homework and she is telling me what to do from another room. I was getting pretty upset by this time because I didn’t understand the language for computers. At this point, I would have been OK throwing the computer out of the window. Jessica had to come and help me since I didn’t know what a URL was. When she said it’s the address, that confused me even more. When I think of an address to a place, I think it’s like the address of a person’s house. But, now, I’m wasting a lot more time and I still haven’t figured out how to find the website. I sure hope the website is worth the aggravation.

She finished what she was doing and came into my room and in seconds she had the page I wanted. Now the problem with that was that she did it herself and that didn’t show me what I needed to do. Anyhow, I eventually made it to the website.

She went back to her room to do her homework. I had to call her back into my room because I didn’t know how to use the mouse which means I didn’t know how to move it or click on it when I found the page I wanted. So, I had to sit and wait for her to show me how to click on the mouse and move it to roll over the link to the page I wanted. Ugh, to say that I was frustrated was a major understatement. It was probably close to midnight by the time I got to the place where I could click on a page. I had to pick Jessica and Beckiah up from school around 3:30 in the afternoon. 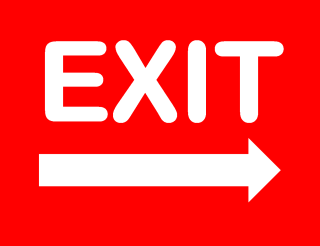 Since it was so late, I had to give up for the night. Jessica told me that all I have to do is exit out of the page and then turn off the computer.  She did come into the room and showed me how to move the mouse. so, now I’m looking for a place where it says “exit”. let me tell you right now, I did NOT find the “EXIT” button.

I want to share this little tidbit. When you’re trying to show someone how to even turn on and shut down a computer, it’s best to not leave them to their own resources.  Anyhow, I was very upset over this who computer thing since I had no clue what I was doing. All I accomplished was Jessica helping me get online and starting up the computer. I spent hours and hours on this whole ordeal and I couldn’t figure out how to exit out of Angelhavens webpage. I didn’t even know how to surf the page or find anything on the website. 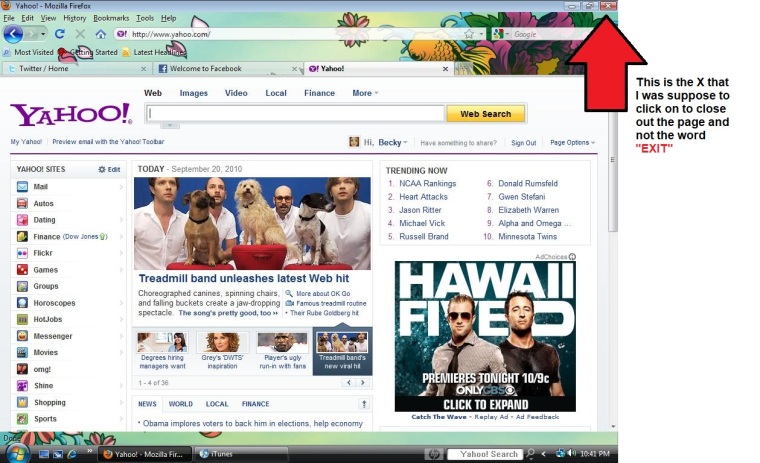 Once I figured out with the help of my daughter, I just had to shut off the computer. She asked me if I needed any more help. I told her I could figure it out and for her to go to bed since she had school the next day. I should have had her come into my bedroom where the computer was.  I tried to look fr a place where it said to turn off the computer. Most of you probably know already that I was having issues.  I couldn’t find the button to shut it off. Jessica turned the computer on so I didn’t see where she did that.  So, I’m looking at the window of the computer and there are no words that says shut down or power or anything. This is what I see since I shut the window to Angelhaven down. 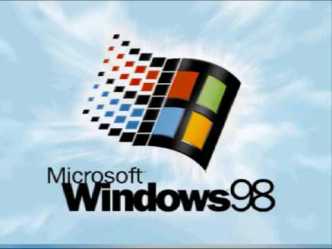 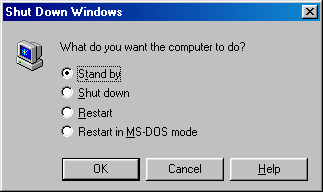 What I should have seen

Since it was now around 1AM, I needed to figure out something since Jessica and Beckiah was in bed. Beckiah was alway in bed around 8pm and Jessica is a night owl like I am. I was beyond ticked over this whole computer ordeal and I almost chucked it out of the balcony in my bedroom. I’m going through all of this frustration because I really really wanted to go to Angelhavens website.  I did figure out how to shut the computer down though and I knew it wasn’t what I should have done. This was my remedy for turning off the computer without destroying it.

I want to close this out by saying that I did eventually figure out how to turn my computer off and I was able to find Angelhaven. Even though I was frustrated and wanted to throw my computer out the window, things worked out and I made some awesome friends.