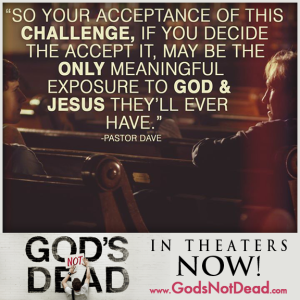 If you haven’t gotten a chance to go see ‘God’s Not Dead”, you should. The show is about a college student who is told if not demanded to proclaim that God is Dead, and he refuses to do that. His professor is an atheist and wants the students to get it out of thier head that there is a God. Since Josh refused, he had to prove in class that there is a God. He then decides to put God on trial and he is his defense attorney of sorts and the professor is the prosecutor. I won’t go into a lot about the movie since not all have seen it. But there is one thing that I had to ask myself. And that is, would I have the strength and ability to stand up the way Josh did to his professor? Or would I take the easy road and just opt out of the class? Since there was no way I would ever write that God is Dead.

On the way home from the movie, we were talking about this point of the movie. And it is hard to know what I would do in that same situation. I would hope I would be like Josh and stand before the class and try to defend God. Realistically I also know that debate isn’t my strong point. But I do know that we are told in Matthew 10:16-33 “When you are arrested, don’t worry about how to respond or what to say. God will give you the right words at the right time.”

I honesty can say if I had to do what Josh had to do, I would be scared to death because I’m not a public speaker. I remember at my church when we first came to St. George Community Church, they asked me to be a lay leader. I had no clue what that was. I knew that if God put it on their hearts to ask, then I should say yes. About a month later, they called me and told me that it was my month to be the lay leader. Now I ask questions, lol. I should have before. My duties meant I had to go up front, read the Bible verse for the sermon, make announcements and so on. Panic took over. I did do it, but I was in a panic the entire time. Most of the times the lay leade 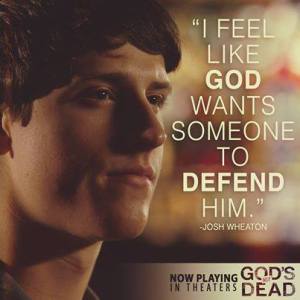 r took about 10 minutes. I was done in three and I was back in my seat. Now, some may have been happy since we got out of church early, lol. But I was petrified to do that. I’m fine if I’m on the same level, but not all eyes on me.

I would say that if I had to do what Josh did, I would be a coward and opt out of the class. Even though I think we all can be a witness for Christ by our words by confessing Christ before others. God wants us to speak for Him and share the gospel with others. I have absolutely no problem witnessing to others about what Christ has done in my life and what He can do in their lives. I do believe that we when we share our experience and can be a powerful witness that nobody can refute.

Most of us won’t have to stand before an professor and class to defend God. And most of us wouldn’t be arrested for our faith like Pastor Saeed and Aisa Bibi and the thousands of others in the world. But we might have to stand before others and speak up for Christ. We may have to try to explain to others why we won’t lie to cover up something that was morally wrong. I have had to stand my ground on a number of things at my work because I don’t celebrate Halloween. I ran a kids program and most of the activities in October were based around witches and other things. I chose to do harvest things instead. I had to tell my boss that I had problems with doing Halloween activities for the kids. Thankfully he understood my stand, but I had to let him know before taking that position where I was at. I also refused to dress up at work and such. So I never worked that night. It was a personal thing for me and I know many Christians that celebrate the night though harvest festivals and such.

As Christians there will come times that we need to speak up and be confident that God is with us, guiding and helping us proclaim the truth without fear. God will give us the words to say when we stand before others.

There was one other part I want to briefly share and that is the part where the mother to the man that is a lawyer came to visit her. She had dementia and he asked her why is it that she is the sweetest and nicest person and she is suffering the way she is. And then went on to say how horrible and uncaring of a person he is. He doesn’t understand how the God she loves could be that way. When she said ‘Sin is like a jail cell except it’s nice and comfy and there doesn’t seem to be any need to leave. The door is wide open until one day it slams shuts.” I found that very profound and true. Why would we need God if we have everything else given to us and life was easy?

Question to ask yourself: If God would give you the correct words to say when you needed them, what difference would this make in the way you live your life?