I’m just now watching the Bible Series on Netflix. I’m on the first part of The Bible. And I am confused somewhat. 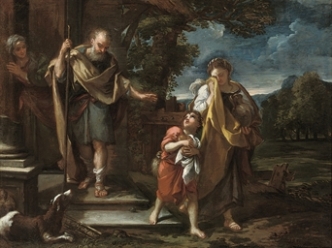 When Sarah thought that she was barren and couldn’t give Abraham a child. She had Abraham go be with Hagar. They had a son together named Ismael.

In Genesis 16:3 it does say that Sarai (Sarah) Abram’s wife took Hagar her maid the Egyptian, after Abram had dwelt ten years in the land of Canaan, and gave her to her husband Abram to be his wife

After Sodom and Gomorrah were destroyed, Abraham moved his camp away from the city , and went to live near a place called Gerar. And finally , the child whom God had promised to Abraham and Sarah, his wife, was born, when Abraham, his father, was a very old man. Abraham and Sarah was very happy when Issac was born.

Sarah was having a bit of an attitude I would say and told Abraham that she doesn’t want to have Ishmael growing up with their son Isaac. Ishmael at the time would have been around 13 yrs old. She told Abraham to send Hagar and her boy away and said they are a trouble to her.

So I can’t help but wonder how she could be angry with Abraham since he did as he was instructed to do from Sarah. And I understand that God has everything under control. But right now, I am thinking that Sarah is more than a bit jealous and not nice at all. She brought this all on herself. What was she thinking would happen if she told her husband to go be with another women. I live in Utah and there is a lot of polygamists here. That sounds like what would happen here. She can’t have it both ways… But who am I to say? God did tell Abraham to listen to Sarah. But I think if I was Hagar, I would be a bit bent… Good thing I didn’t live during this time period. I might have been stoned to death by someone.

Abraham sent Hagar and her boy away, expecting them to go back to the land of Egypt, from which Hagar had come. He gave them some food for the journey, and a bottle of water to drink by the way. I know Abraham was a kind and loving person, but I can’t even begin to wonder how long in a hot dry desert would that water and food last. Eventually they ran out of water and food and was lost. In terms of today Abraham would not have been a good dad at all because you don’t send people out into the desert alone.

Of course God didn’t leave her and Ishmael. And as a mom myself, I would be pretty stressed out and worried if I was watching my child suffer like Ismail was suffering. As she was crying she heard a voice say to her.

“Hagar, what is your trouble? Do not be afraid. God has heard your cry and the cry of your child. God will take care of you both, and will make of your boy a great nation of people.”

It was the voice of an angel from heaven; and then Hagar looked, and there, close at hand, was a spring of water in the desert. How glad Hagar was as she filled the bottle with water and took it to her suffering boy under the bush!

But here is the Bible Verses that talk about Sarah, Hagar, Ishmael and Issac.

8 The child grew and was weaned, and on the day Isaac was weaned Abraham held a great feast. 9 But Sarah saw that the son whom Hagar the Egyptian had borne to Abraham was mocking, 10 and she said to Abraham, “Get rid of that slave woman and her son, for that woman’s son will never share in the inheritance with my son Isaac.”

11 The matter distressed Abraham greatly because it concerned his son. 12 But God said to him, “Do not be so distressed about the boy and your slave woman. Listen to whatever Sarah tells you, because it is through Isaac that your offspring-will be reckoned. 13 I will make the son of the slave into a nation also, because he is your offspring.”

14 Early the next morning Abraham took some food and a skin of water and gave them to Hagar. He set them on her shoulders and then sent her off with the boy. She went on her way and wandered in the Desert of Beersheba.

It does go on and says what became of Ishmael. But I still don’t think that Sarah should have been so angry and jealous because she is the one who instructed Abraham to go be with Hagar in the first place.

15 When the water in the skin was gone, she put the boy under one of the bushes. 16 Then she went off and sat down about a bowshot away, for she thought, “I cannot watch the boy die.” And as she sat there, she[b] began to sob.

17 God heard the boy crying, and the angel of God called to Hagar from heaven and said to her, “What is the matter, Hagar? Do not be afraid; God has heard the boy crying as he lies there. 18 Lift the boy up and take him by the hand, for I will make him into a great nation.”

19 Then God opened her eyes and she saw a well of water. So she went and filled the skin with water and gave the boy a drink.

20 God was with the boy as he grew up. He lived in the desert and became an archer. 21 While he was living in the Desert of Paran, his mother got a wife for him from Egypt.