I just finished watching the last part of The Bible mini series. I haven’t watched the other parts, but have them DVR’d. Sorry if this post has my thoughts going in a number of directions, but it was as I was watching the show. This post was written as I was watching the show The Bible. Now I have to go out and buy the mini series so I can watch it all instead of having the commercials. I think it would be money well spent… Time for a marathon of the Bible… 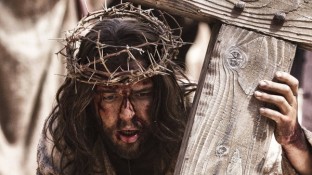 As I’m watching this, it speaks to my heart about how much Jesus loves us and that He died for our sins. When He was up on the cross, it showed me how much He has done, he died and rose from the dead. He did this because of me. I always knew why He died, but seeing Him up there and the pain, blood and tears has a way of making it real.

I can’t even imagine what everyone was thinking as they stood there and watched Jesus die on the cross. And to think about the moment He died, the heavens became dark and the earth shook. The horror and guilt that must have plagued some of them had to have been overwhelming to say the very least. After all, the just killed Jesus Christ, the Son of God. And to go to His tomb and see only the garments.

I never knew and why I never knew that Jesus walked the earth for 40 days. For some reason, I was thinking that on the third day, he rose from the dead and ascended into heaven. I knew he was seen by his apostles and others, but I didn’t know that His spirit was here for 40 days.

A young man named Saul ordered Steven to be stoned and because he considered what Steven was saying to be blasphemy. Saul later became known as Paul the Apostle. When Saul’s (Paul) orders ended Steven’s life and right before he died he seen the heavens open and there was Jesus standing at the right hand of God must have been amazing. I wonder what those that stoned him thought about killing one of Gods servants  What must have gone through the minds of the soldiers when they realized that Jesus is really the Messiah? What did Judas think about betraying Christ? I would not want to be any of those that took part in these deeds. But yet, it was because of me that Jesus had to die.

I love how Jesus would show up to talk to the apostles. I wonder if Jesus came to me, if I would be a doubting Thomas or would I be like Peter and the other apostles who had such a strong faith that He is Who He is.

And when Paul was blinded because of the persecution of God’s people. Jesus chose Paul to proclaim the Good News of Jesus Christ. When Ananias baptized Paul in the name of Christ and the look of peace and acceptance that came over him was awesome.

I remember how I felt when I was baptized and it was like nothing else I have ever felt. I knew for years that I wanted and needed to be baptized. I would loved to have been there during the time when Peter was baptizing all of the believers of Jesus. 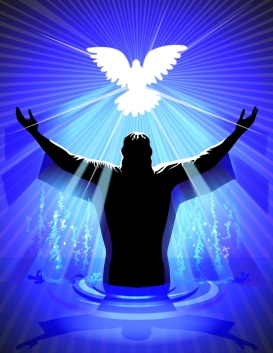 As I’m watching this, I would love to see an old fashion way of going down to the river and being baptized or rededicate my life to Christ. My life belongs to Him anyhow. But there is something that I find peaceful and reassuring when I know that God is pleased and that we can be free. Just the thought of going to the river and my sins washed away and reaffirm my dedication to Christ alone.

I love the part when Jesus comes to Peter and tells Him that He is the Alpha and the Omega, the beginning and the end. Revelations 21;4- And God will wipe away all tears from their eyes; and there shall be no more death, neither sorrow, nor crying, neither shall there be any more pain: for the former things have passed away. May the grace of the Lord be with all God’s people.

What a awesome moment that will be when we will be with Christ. I’m so grateful that I can have assurance in this and that Christ has forgiven me for my sins, even though I have a hard time accepting that forgiveness. I pray for His kingdom to come and His will be done, on Earth as it is in Heaven.