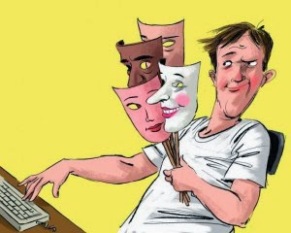 Sorry this is a long blog, but it is worth reading. It is warnings to prevent you from being scammed and taken advantage of online.

Have you ever wondered if the person you are talking to over the internet is really who they say they are? I know I have questioned this at times. The internet has made it possible for people to live anyway they want. There is a commercial that is about how the woman believes everything on the internet. If it is there, it must be true. The internet has changed the world when it comes to health and allowing people to self-diagnose. There are positives and negatives when it comes to too much information on the internet. This becomes a form of trolling.

Also, the internet and social media sites such as Facebook, Twitter and other ones makes it easy for scammers to take advantage of people. Lately there has been a number of scams showing up on Facebook. I am mainly thinking on Munchhausen by Internet. It is a slap in the face when we discover that we have been lied to. Millions have people have fallen for the lies of those who prey on the heart of unsuspecting people.There are some pretty elaborate stories out there. With everything available online, it is easy to research an illness. It doesn’t take long before they come across sympathetic listeners. Most who have Munchhausen by internet are lonely people who are craving sympathy and attention.

Many times the person who has Munchhausen by Internet will start off getting to know those involved in the groups. I first noticed this when I went to my first chat-room on Angelhaven. I noticed how easy it was to deceive someone. I never used the internet, so this was all new to me. There was one lady that was from Canada. I think her name was Ginger. She was talking about her struggles and eventually, she gained the trust of those in the chat-room. She was getting Sympathy and people invested a great deal financially  and emotionally. I feel for it also and she sent me her telephone number. She proceeded to ask for money and it became emotionally draining. I had to step away.

Munchhausen Syndrome — a condition in which patients fake illness to get attention, often undergoing unnecessary tests and surgeries — is rare, such online versions of such fraud are becoming common enough to concern people with real life-threatening illnesses in support groups. There are a number of types of Munchhausen such as Munchhausen by Proxy, which means they hurt someone else. Or there is Munchhausen Syndrome where a person hurts themselves and seeks attention. This blog is about Munchhausen by Internet.  I belong to a group on Facebook that discusses Guillian Barre Syndrome. It is easy to get sucked in if you’re not careful. More and more cases of Munchhausen by Internet are occurring. Below are some examples that I have directly witnessed.

I was reading how a woman who was sick both physically and emotionally ended up soliciting funds from everyone all over the world. The had people paying bills, sending gifts and paying for special trips. She is receiving services from the state and she is getting private donations. People with Munchhausen end up costing the medical system billions of dollars each year. There are people sitting in prison right now for faked and exaggerated illnesses. Munchhausen has a way of destroying families financially and emotionally. They are prisoners in a sense.

Now days it’s hard to not hear about these kinds of things. It’s as if those who help others and feel they need to be like Christ and show love are targets to these scammers. Don’t buy into this type of behavior. Below are some tale tale warning signs when it comes to Munchhausen by Internet. By the way, there are also other forms of Munchhausen.

For me, I guess this is a personal issue since I have known a few that have done this. I was fooled a few times and I have my guard up now. The nice thing about the internet is that it is easy to research things. Most times these scammers are going to other websites and learning about their fictitious and life threatening illness. Not everyone that posts or shares what they are going through are like this. There are genuinely sick people who needs help. Those who are deceitful makes it really hard to trust those who are honest. It’s sad that it has to be that way.

Those who have this lying disorder most of all are seeking attention, funds or material items. There will be some truth to their stories so they can prove something to those who want proof they are sick. The majority of people are honest and they have no problem sharing with you. I would thing that the famous quote, ” if it is too good to be true, it probably isn’t.” Also it seems terrible and dramatic and someone says how bad things are, it probably isn’t. Trust your instincts. If you have a feeling you are being lied to, you may be right.

I try to be a loving and caring person. As a Christian, we are to treat others how we would like to be treated and to love others. When it comes to online scams and those who only care about themselves I have found that I can’t always trust what people post online. Most people on my Facebook I know personally or have met. Those who I don’t know personally doesn’t get all the posts I share. It is important to protect yourself when it comes to online relationships.

In closing, I just want to say that while the person is deceiving and doing what they are doing, we must remember that this is also a mental disorder and that needs to be treated. While I hate being lied to and deceived, I try to remember to love the person, pray for them and listen.