“You have heard that it was said, ‘You shall love your neighbor and hate your enemy.’ But I say to you, Love your enemies and pray for those who persecute you, so that you may be sons of your Father who is in heaven. For he makes his sun rise on the evil and on the good, and sends rain on the just and on the unjust. For if you love those who love you, what reward do you have? Do not even the tax collectors do the same? And if you greet only your brothers, what more are you doing than others? Do not even the Gentiles do the same? … 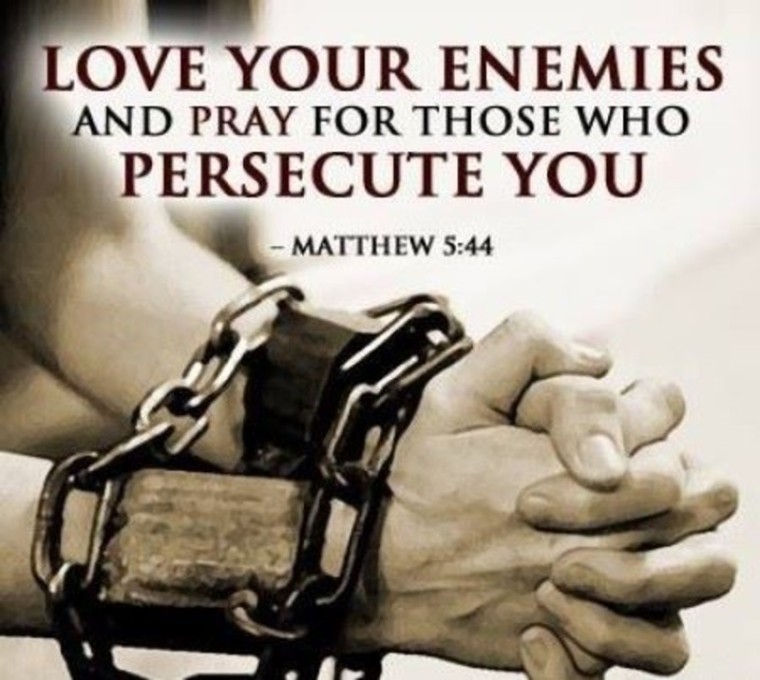 Over the past month my heart has been hurting for a number of reasons.  For the most part it’s because of divisions of people. Not really about the kind of divisions that happen at church. I’m talking about the anger, resentments, children and families being torn apart. I try my best to stay out of political stuff on my blog and on my Facebook Page. While all the things going on in the world is eating at my heart, I decided I needed or wanted to share some of my thoughts.  I honestly believe that Satan is causing division and hatred in our world.

What’s really bothering me more than these things is that even Trump is those who say they love people. I have seen many changes in the last 5-6 years when it comes to showing honest Christian love. To me all of this seems like a reality show. When people’s lives and families are being destroyed at every turn, it becomes very real, real fast/

I want to give a bit of a background and part of a conversation I have had over the past few weeks. This conversation began with  a young man sharing his rallying cry that

In the mid 70’s I attended a little church called Willcox Church of the Nazarene. Pastor Harry Myers put together a revival. In my church it is best described as a series of worship services in which a visiting preacher, and sometimes a visiting choir director, come to a church to lead special worship services.

When you attend these services there is usually a special emphasis placed on leading people. The evangelist who was visiting our church focused on building a personal relationship with Christ and with Christs people. I really think we need Revival in America again.  We NEED GOD in AMERICA and in our WORLD. It isn’t going to be Trump or any world leader that can pull us through the hatred.

Packer lists five Marks of Revival:
(1) Awareness of God’s Presence
(2) Responsiveness to God’s Word
(3) Sensitiveness to sin
(4) Liveliness in Community – A revived church is full of life, joy, and power of the Holy Spirit
(5) Faithfulness in testimony – an evangelistic and ethical overspill into the world.

I don’t want to make this blog all about Trump. The reason why is because he is the effect. Satan is using him as a tool to destroy our world.

As I was thinking about what to write I had a conversation on my heart. It was a conversation about how evil liberals are. This gentleman will post pictures of him and his family going to church. As he attends church he goes out of his way and sharing how all Democrats and liberals are no better than Satan and that they should die in the fiery pit.

Those who do not yet have a relationship with Him, to Christ. The church members often help out by doing such things as singing in the “revival choir,” bringing their friends to “pack a pew night,” or serving pizza to teenagers before the service on “youth night.” Sometimes the services are preceded by “cottage prayer meetings,” where the members go to a member’s home to pray together for the services. This is pretty much what the word meant as we heard it growing up. Because of this tradition, there remains a “terminological inexactitude” (to borrow a phrase from Churchill) among many Baptists concerning the meaning of the term, revival.

My biggest issues with Trump is that feels that he is superior over anything and anyone. He’s a complete rear end. Some people say that he isn’t politically correct.

Here’s my list of reasons I have no respect for him as a person or a President.

He thinks he’s just “telling it like it is.” Sure, if you think that white males are superior and should keep ruling the world. Instead, he’s just a hateful asshole who likes to slam Muslims, Mexicans, women, gays, blacks, transgender people, poor people, and anyone who’s not a fat orange ball of hate with no innate intelligence or talent who’d be mopping floors if it wasn’t for daddy’s money.

I wrote a personal letter to my friend since it was her son that I blocked on my wall. I will just share a bit of that conversation. I let her know that I removed (*******) from my friends list. I told her I was tired of all of the hateful posts that was said from Trump. I’m tired of hearing about all of the hateful posts that was directed at anyone and everyone who didn’t agree with them.  He also didn’t have a problem when Trump was having affairs on his wife.

I finally had enough when he said that all liberals should go to hell and that all Democrats are worse than pond scum and leeches. I  always vote for the person, not the party. So according to him, I’m pond scum. I prayed heavily on if I was unfriending him because of his racists comments or where I hear people say that even though they are Christians, it’s OK to treat people this way since they are from Mexico or other countries.

All people no matter where they come from should be respected. People shouldn’t be judged because of where they were born. If people are coming to our country, they should be here legally. It blows my mind that Christians are claiming at any one from Mexico is an enemy of our country. Instead of showing love and compassion to others, we are showing them hatred. I’m actually doing blog on this topic. We even have people at my church hating on others that visit. Instead of being Christlike, we are turning them away. But, the biggest thing that get’s me is when as Christians, we are to build people up and to show thm Christianity and love. Lately, I see our country that I love as being was of the most hateful of all nations.

If My people who are called by My name will humble themselves, and pray and seek My face, and turn from their wicked ways, then I will hear from heaven, and will forgive their sin and heal their land.”

But that’s the whole deal, isn’t it? Getting God’s people to humble themselves, to pray, to seek God’s face, and repent? It would seem that if all that is happening, you have revival! The condition being met in this passage leads to forgiveness and restoration; at least that’s what it says after the word, “then”.

So, should we pray for revival? Of course! That’s what we see the Psalmist doing in the verses above. But can we reduce the work of a sovereign God to a man-dependent formula? No. Revival is the work of God. We pray for it because we are dependent upon Him to send it.

He is also convinced by all of the right-wing papers when they say all kind of things. As I research his comments, I realize how dangerous these conspiracy theories are. This young man is a very intelligent person. I just don’t understand how a man of faith and professes that he takes everything to the Lord would believe things that the Lord. The Lord is all about love and truth.