This is one of those cliche’s or quotes that aggravate me: It is said that the most dangerous phrase in the language is ‘we’ve always done it this way.’

Matthew 15:6 – “…So for the sake of your tradition you have made void the word of God.”

Jesus spoke these words to the religious leaders of His day. Earlier they had confronted Him and asked why His disciples doesn’t follow some of the cleansing ritual ceremonies of the elders. Jesus went on to point out that these rituals are a man made tradition. It was not prescribed by God’s law (the Bible). We hold to our traditions so closely that we treat them as if they came down from the mountain as God’s holy commands.

Someone asked me why we do certain things at our church. And all I can say is that is the way they have always done it, and I don’t think it will change. This was asked some time ago. I do wonder how many churches do things out of tradition, but they don’t really know why. I have also asked this question when I visit other churches and for the most part the answer isn’t know. They don’t know why they are doing what they are doing, they just say, “it has always been done this way.”

This is one of those cliche’s that drives me crazy. When I get into conversations about this cliche it brings up various emotions in people. Mainly the tradition I bring up that while it is a good one but also is something that many don’t like is meeting and greeting during the Sunday service. I have discussed this tradition a number of times. Continuing to do things you’ve “always done” is appropriate in some cases, but not just because it has always been done. I can understand why people enjoy this, but there comes a time when things need to change because change is good. It’s a dangerous myth to think that we can stand still, or do what we’ve always done.

The Ham Story- Why do we do that?

By now you may have heard the story about the Christmas ham. (Preachers love it.) It goes like this: One year, as Mama prepared to put the Christmas ham in the pan, she cut a piece off one end. Her daughter was watching, and she asked, “Mama, why do you do that?” Mama thought a moment and replied: “You know, I’m not sure. All I know is that my mama always did it that way.”

So the daughter went to Grandma. She asked Grandma if it was true that she always cut a piece off the Christmas ham, and if so, why. “I don’t know, child,” said Grandma. “I guess it was because my mama always did it that way.”

I am a creature of habit just as much as anyone else. I like things a certain way. I have found that I am guilt on using the cliche ‘I have always done it that way” way to many times. As time goes by, I realize that doing things the same way over the years and through generations doesn’t always work for everyone. My traditions or habits don’t work for others too. And I can’t always explain why I do something, I just do. As humans we don’t like to put ourselves into situations that are outside our comfort zone and rituals. And when it comes to this, I am no different than anyone else.

Times do change and how we communicate and reach out to others needs to change as well. We should be going to church to worship God, not worry over music, traditions and all the other distractions.

The stereotype or those who use this cliche are usually the die-hard, traditional, older member who can’t see past the decisions and patterns of behavior in the past. We have gone to our church since we moved to St. George over 19 yrs ago. I have heard this cliche so many times and with each pastoral change. I feel bad many times for the new pastor or new leaders because it is as if they must stick to the things of the past because people have always done things a certain way. I do believe that by not changing some members may be saying, “Pastor, this has meant a lot to me in the past. I just want you to know this will be a difficult change for me.” Change can be difficult to say the least. But there does come a time when change needs to happen.

So when newcomers express interest and want to become fully involved, they begin to look at the church or organization with new eyes. Suddenly, the questions start to arise: “How come we do this?” “Why do we do it this way?” “Has anyone ever tried this this way?”

I’m pretty sure pastors cringed when they come to a new church and the members and leaders wants to have them preach or do the same thing. Thankfully our church isn’t as bad as some. Every time I hear “We’ve always done it that way,” my mind was goes ballistic to the stereotype.

When I think of this phrase or cliche when it comes to church leaders and pastors, I think back to my days working in sales. When I have heard this cliche at places I have worked or churches I have gone to, it stops me in my tracks because it is as if they are saying that they don’t value my opinion or ideas I can bring to the table. This is the way it is and if you don’t like it, move on. 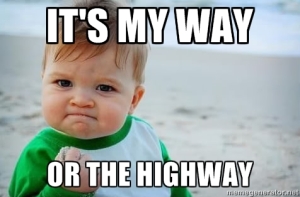 My church is considered a traditional church. We have our own set traditions that at times bug me to no end. But there isn’t much I can do about it. I can complain, which you all get a chance to hear me vent on things like this. It’s as if some long time members consider these traditions a must have and they can’t see it being done in any other way. It’s the my way or the highway mentality.

Traditions aren’t necessarily a bad thing. But when I read Matthew 15:6 – “…So for the sake of your tradition you have made void the word of God.” this verse reminds me that I need to guard how and why we do certain things. Are we doing them simply because “We’ve always done it that way!”? 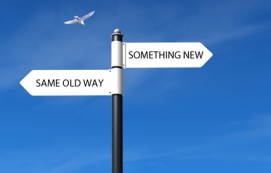 People have a way of obsessing over change and at times chaos is created. Some churches have coasted for so long on autopilot that they truly cannot tell you why they do the things they do. I often wonder if people are too afraid to challenge a tradition. They don’t want to offend anyone. When we first started going to our church. There was this couple that was there. They donated a piano and some other things to the church. Eventually they moved away and went on to be with the Lord. Someone asked the choir director why we were doing something the way we were. And they told them that we done it this way because of who donated the items. So until the person is no longer with us, we will continue to do this. I was confused by this. They were doing this activity because someone that no longer goes there liked to do it, so they continue for no other reason. Hmmmm…

I have worked in sales most of my life and from the prospective of a salesperson I think about how we are representing Christ and the image we are putting out there. If the traditions and habits we are doing are ineffective and aren’t advancing the growth God’s Kingdom, then it’s time to stop, evaluate, and possibly move in another direction.