I guess for me this is a silly question. I would have to say without a doubt that it is real. The reason I posed this question is because of a movie I’m watching right now. The movie is called Jerusalem Countdown. It is an end times movie that discusses the prophecies in the Bible.

What I was thinking about during this movie is how they get into the discussions about if the Bible is real and they really believe that Jesus Christ came to die for us. The two main characters talk about this between themselves and I found it sad to know that they are no different than anyone else. We have to see to believe. For me faith is much more than having to see.

I can’t help but wonder what it will be like when Christ comes again. There are many thoughts and theories out there about the end times and when Armageddon will begin. Some believe we are in the tribulation period now. While others think it will happen in a twinkling of an eye as spoke about in 1 Thessalonians 4:17 After that, we who are still alive and are left will be caught up together with them in the clouds to meet the Lord in the air. And so we will be with the Lord forever. This is what I’m hoping happens, because with all the Bible says about the end times, I would much rather be with Christ then here for all that stuff. But, back to theories, there is the mid trib and post trib. 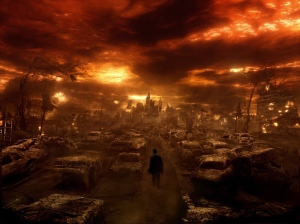 I think about all those who could be lost and left behind. I can’t even begin to imagine how much horror those left behind will feel when the go searching for those who are no longer here. As the show ends they describe the pre-trib and how the believers in Christ will be taken up and left standing are those who thought they believed and never really truly accepted Christ. You also have those who never believed and they have no clue what is going to happen and how horrible things will be for them.

When I think about what I believe I can only say that I don’t know what theories it is going to be because God already has His mind made up. I may want it to be a certain way and to be taken before the tribulation period begins, but that may not be that way. My deepest hope and it’s because I’m a chicken when it comes to reading what will happen is that the rapture happens first and then all the other stuff goes on. All I know is that I know that God will be the ultimate winner and there is no need to go to the other side since I already know this. Who would want to be on the loosing side to begin with anyhow? NOT ME!

When they posed the question the few times in this movie about if God is real and if the Bible is real. My answer would be YES! I may not always understand, well, forget may not, I don’t always understand why something is happening or what God is meaning. When the time comes He will disclose that and who knows, it may not be important anyhow.