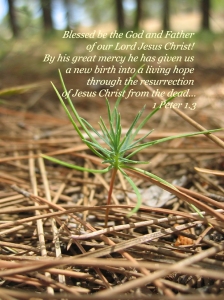 “Blessed be the God and Father of our Lord Jesus Christ! According to his great mercy, he has caused us to be born again to a living hope through the resurrection of Jesus Christ from the dead.” 1 Peter 1:3

As I look back over the past several “Musings” it is apparent that the whole issue of “hope” has become a really big deal for me. As I reflect back on the year 2014 I would have to say that more than anything else this has been the year that God restored hope to my life. What a glorious and precious thing to have. Without hope we are as good as dead.

I have spent a good bit of time here just reading through all of the verses in the New Testament that mention the word “hope” – a total of 151 times in the English Standard Version. That’s a whole lot of hope. Apparently this is something that is very central and crucially important in the life of a believer.

Last week I talked about how the Holy Spirit creates hope within us by depositing and then “spreading abroad” the love of God into our hearts. This hope does not disappoint us because it is, in fact, the guarantee that we will one day inherit the full inheritance of the glory of God which has been promised to us. This “hope” is actually nothing less than the “blessed assurance” that we will one day be in the very Presence of God Himself and see Jesus face to face. This is our “hope of glory” and the end result of the salvation of our souls. It is this hope to which we have been called. It is our “blessed hope” and the high calling of God.

So I want to dig a little deeper into an understanding of what this hope is and what it does for us. In Hebrews 6:19, 20 we find this fascinating passage:

“We have this hope as an anchor for the soul, firm and secure. It enters the inner sanctuary behind the curtain, where Jesus, who went before us, has entered on our behalf. He has become a high priest forever, in the order of Melchizedek.”

The original readers of the Letter to the Hebrews were very familiar with the imagery used here. The comparison of an anchor to convey the idea of hope was very familiar symbolism in that day. In fact, archaeologists have actually found coins dating back to the first century with pictures of an anchor and the word “hope” beneath it. Here, the writer of Hebrews says that hope is “an anchor for the soul”. Think about what an anchor does for a ship. In the midst of the worst turbulence, tossing waves and blistering winds, the anchor is securely fastened and embedded beneath the surface where everything is calm and steadfast. As Barnes says in his commentary, “Hope accomplishes for the soul the same thing which an anchor does for a ship. It makes if fast and secure.”

But it keeps getting better. At this point the metaphor of an anchor changes and we are now introduced to the imagery of the Temple in Jerusalem and particularly the curtain or veil in the temple which separated the outer sanctuary of the holy place from the inner sanctum of the Holy of Holies: “It (hope) enters the inner sanctuary behind the curtain”. This is an absolutely amazing statement! That hope we have, which is a “certain anticipation” of the promised glory of God, is pictured here not as an anchor resting on the bottom of the sea, but rather as reaching in beyond the veil of the Temple and attaching itself to the very Presence of God seated on His throne upon the ark of the covenant. (I feel right now it would be very appropriate to simply say, WOW!) Our hope actually transcends this world in which we live and connects us to the eternal, invisible realm where Jesus is currently reigning in His glorified role as our High Priest and Ruler of the Universe! We are talking here about entering into the invisible realm of the reign of the Kingdom of God. The veil in the Levitical temple served as a type and shadow, representing the separation of this temporal realm of time and space in which we presently live from the ultimately real realm of heaven where Jesus is currently seated at the right hand of God. As one commentator I read said, “The hope of the Christian enters into Heaven itself, it takes hold of the Throne of God, it is made firm by being fastened there.” Another says, “The anchor is not dropped into any earthly sea, but passes as it were through the depths of the aerial ocean, mooring us to the very Throne of God.”

So the picture the Holy Spirit is giving us is that of an anchor securely embedded into the transcendent, eternal Glory of God, beyond the veil, i.e., on the other side of this time-space curtain which separates us from the eternal heavenly realm where Christ is now ruling and reigning over the entire universe, supreme as glorified heavenly king.

One last thought here. In 1 Peter 1:3, the apostle speaks of this hope as being “a living hope”. I find that very interesting. The word for “living” is a form of the Greek word “zoe” which means the very life of God. The hope we have, which is an anchor which transcends this temporal world of time and space and actually enters into the very presence of God, embedding itself into God’s throne, is a hope which is alive with the very life of God. It is not a dormant or a static hope. It is living, thriving and pulsating with the very zoe of God Himself. And as a “living hope” it acts as a conduit which transfers and transmits back to us, into our personal spiritual experience, the reality of that realm to which we ultimately belong and will one day experience in totality.

And now, in closing, receive the benediction of hope:

“And now, may the God of hope fill you with all joy and peace as you trust in him, so that you may overflow with hope by the power of the Holy Spirit.” (Romans 15:13). Amen.